The UK drifts off into uncharted waters

Whilst the UK slips away from the EU efforts to protect the planet, the world continues to turn and global warming continues to go up and up, wreaking the devastation predicted.

The EU has been co-ordinating pledges across the 28 members, providing grants, loans, shared research and common standards. Now the UK (and/or England, Scotland, N Ireland and Wales separately) must now write, or rewrite mountains of legislation taking years, using hundreds of bureaucrats and most of parliamentary attention. The Centre for European Reform in July 2016 identified 6 interlocking sets of negotiations before we have slipped anchor:

And will legislation protecting our Air and reducing our carbon emissions be ‘highly ambitious’ or forgotten?

Carbon emissions and air pollution know no boundaries and actions by the biggest emitters – India and China and the USA will make the most difference. The UK is small and people will say that our contribution is unimportant. But our future relies on innovation and influence. If we allow Climate Change to be shelved until a convenient time other countries may follow our lead. If we co-operate across borders and unleash the best of our innovation and entrepreneurship we can make a difference.

The UK in a Brexit world goes through some of the EU legislation that must be undone/redone and has information about the UK’s formal commitments and reliance on EU financial services to combat Climate Change.

Brexit: What does it mean for the environment? Click here for a podcast of this Castle talk of  26th Sept 2016.

END_OF_DOCUMENT_TOKEN_TO_BE_REPLACED

The encouragement of trade in fossil fuels (US imports into the EU) would make it more difficult to move to a low or zero carbon economy, particularly as efforts to reduce fossil fuel use would be vulnerable to legal action by multinationals.

TTIP, which is currently being negotiated between the EU and the US, despite a rising tide of popular objection, is a free-trade proposal which seeks to level out barriers to trade between the EU and the US.   Multinational companies are supporters of TTIP, as they hope it will expand their profits.     Many EU governments believe that more trade will create both jobs and profits.

The Friends of the Earth material is here (brief version) and here (more detailed version): END_OF_DOCUMENT_TOKEN_TO_BE_REPLACED 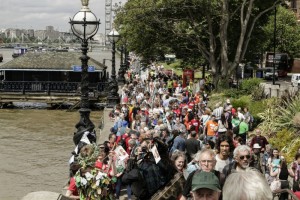 This was the scene, on the embankment opposite the Houses of Parliament, where most London constituents gathered to meet their MPs.

A noticeable local absentee was Mike Freer (Finchley and Golders Green). He did not reply personally to a letter inviting him to meet, but let it be known through his PA that he would be unavailable to meet constituents at the lobby. 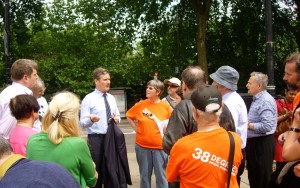 END_OF_DOCUMENT_TOKEN_TO_BE_REPLACED

Is the Future worth a conversation?

Carbon Conversation meetings have inspired people across the UK to reduce their impact on the environment.