Air in North London is monitored with Automatic monitors, managed by the Environmental Research Group of King’s College London and Non-Automatic monitors, often installed by concerned citizens These reveal how badly EU pollution limits are being exceeded at particular spots. But to get an idea of pollution during typical trips for individuals, an experiment was carried out by a BBC journalist in March 2016  ‘How much diesel pollution am I breathing in?’ using a personal exposure meter loaned by Kings College London. 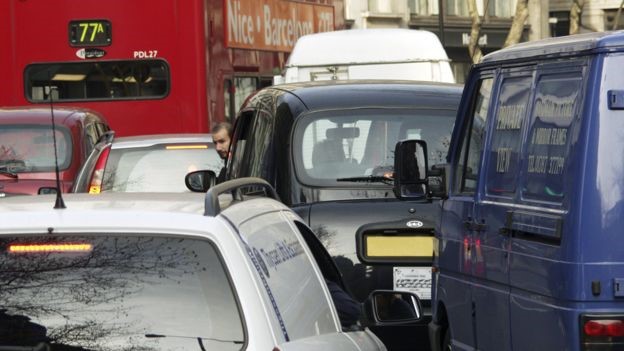 In descending order of micrograms per cubic metre the readings were:

*  “below ground most of it is oxidised iron coming from the tracks. It’s well known that the Tube is a dusty environment, but what is not well known is how toxic the specific kind of particles that we breathe while travelling underground are.”

The experiment may not have been scientifically thorough, but it gave a good indication of the relative pollution levels that affect you, and your loved ones – in different places, on different days and in different ways to get about. Readings at fixed points can only give glimpses into the problem and ideally monitoring would be per person per route.

How polluted is my road has a page for How Polluted is my School?. This has a map plotting schools within 150m of roads with over 10,000 vehicles a day. It points out “that children exposed to higher levels of traffic-related air pollution at school and home may be at increased risk of developing asthma.”

London’s Polluters and the Limited Power of Boroughs

London Boroughs have limited ability to effectively remove the causes of the pollution, as explained in the Jan 2016 draft of the London Local Air Quality Management Policy Guidance 2016 (LLAQM.PG (16))  states at: ”1.01 Local authorities cannot solve the problem of air pollution alone, there are many actions that are the responsibility of regional, central and European governments. However, local authorities have a central role to play in achieving improvements in air quality. They have responsibility for a number of key levers such as parking, Planning, and local roads, and they also have a wealth of knowledge about the communities they serve.”

Camden has summarised the causes of PM10 and NO2 pollution, at a London level and at a Camden level, from  raw data from Clean Air for London in its draft Camden Clean Air Action Plan 2016-18 (for public consultation February 2016). The data shows that harmful emissions arise indoors as well as outdoors.

In descending order of damage the percentages of PM10 and NO2 of the total across London from these summaries are:

Based on these London wide figures, priority should be given to reducing the pollution from cars, HGVs and LGVs. However, Boroughs that have high levels from construction or aviation, for instance, also need to tackle these.

Because the problem is complex, and the causes are often not near the effects – or are even visible – citizens can be more effective by working together and pooling resources. They can support positive action from the authorities; work on additional data gathering; investigate possible solutions and lobby people who could do more. See also the Green Alliance’s A Greener London -What the Next Mayor can do to Improve our Capital and Clean Air London’s Clean Air Manifesto for the Mayor. The Media is also putting pressure on the authorities to take action, such as Today , The Evening Standard “Revealed the 20 Blackspots for Toxic Air in Londons and The Guardian “The Truth about London’s Air Pollution“.

See below for some local North London initiatives to monitor/understand and publicise the worst pollution culprits and locations. See also Mapping for Change that advises on citizen monitoring and advises on purchasing of monitoring equipment. Or I Like Clean Air that offers monitoring services. Nature in July 2016 said that it is important to Validate personal air-pollution sensors or regulators could be flooded with misleading data.

Just for example the following ideas include one that would identify vehicle by vehicle their level of pollution opening up options to remove the worst offenders; a possible way to absorb pollution through trees and a smart way to tailor (better) data to help people avoid polluted routes.

A trial by the Universities of Birmingham, Leeds and King’s College London, in Feb 2016, funded by the Department for Transport is for pollution cameras trialled in Birmingham and London “The US-manufactured devices shine a laser beam through exhaust fumes and use reflected light to measure levels of toxins. In America, the cameras are used to identify and reward the cleanest car drivers from their annual emissions test.” The Driver and Vehicle Standards Agency (DVSA) must introduce legislation from May 2017 with changes to emission inspection tests from May 2018 to comply with EU Directive 2014/45/EU.  This could be the point at which MOTs could use updated testing technology.

Absorbing pollutants with vegetation and trees

Air Quality News reported in 2012 on the woodland conservation charity’s ‘Urban air quality’ report in collaboration with Lancaster and Birmingham universities which examines how urban greening can be best tailored to achieve air quality goals while creating health and social benefits.

Haringey promote the use of Walkit. Although this tool may not be based on sufficient data and the low pollution choice is only available for inner, west and north London there could be potential to create a smarter App. Perhaps there is scope to utilise Kings College London personal exposure meters as discussed above.

For instance the Mayors office calls for Londoners to send in any ideas of steps that can be taken to spot problems with construction sites. One idea is for contractors to use Hybrid machines, rather than continuous diesel machines, such as Firefly.

For instance Underground Ventilation could affect PM2.5 pollution according to the EU.

What could be done – by whom – that isn’t being done? Lobbying needs to be focused on the people and bodies with powers over the most harmful effects. You can join in protests to the government, such as Stop Killing Cyclists had a Transport Pollution Die-In protest in April 2016 at the Department for Transport. It was to “condemn the UK government’s actions which over the last year have deliberately destroyed progress towards reducing the horrific death and disease toll from transport pollution.”

Another powerful approach is to use the Courts. For instance Client Earth’s case against Defra for missing EU pollution targets requires expertise and funds. They are asking for crowd funding for the next step of its NO2dirtyair  action against Defra. “As the government can’t be trusted to deal with toxic air pollution, we are asking the court to supervise it and make sure it is taking action.” You can also seek recompense for loss and ill health through the courts. For instance “If you, or a member of your family, have been affected by air pollution and your health has suffered” contact Hodge, Jones and Allen of Hampstead, as they are “examining the possibility of bringing a “right to life” challenge arising from the health impacts of air pollution.” In June 2016 the first case was announced – against Lewisham and London.

These are just a very few suggestions, but a concerted effort by Citizens to express their views could make a significant difference to action.

The Highgate Neighbourhood Forum Campaign for Cleaner Air aimed “to post diffusion tubes at 50 locations for a month and measure levels of NO₂ (nitrogen dioxide).” They will participate in the Hampstead Forum’s initiative above.

The Camden Green Party have been monitoring Air Quality in Gospel Oak, Highgate and Kentish Town. They are holding a public meeting on 5th April 2016 at 7pm at Kentish Town Community Centre, 17 Busby Place, NW5 2SP. “How bad is the air where you live, work and play?”

The Hampstead Forum  have “placed NO2 diffusion tubes at 31 locations around Hampstead and discovered that at some locations with heavy traffic, readings were approaching double the legal limit.” They are working with other local groups, such as those above, and held a public meeting in April 2016, reported by the Ham and High . Speakers were:

The meeting was hosted by Castle Debates and was be chaired by environmental lawyer Pamela Castle OBE.

To contact your Haringey councillor click here. Haringey Council’s Transport Forum has published Haringey Transport Forum 31-1-17 – Air Quality report. This shows that the majority of NOx from transport in Haringey is from TfL buses, followed closely by diesel vehicles. (p11). It also shows that Wood Green is one of the most polluted corridors in Haringey (p8).

Haringey Council has been funded £609K over 3 years from the DfT’s  £40m Go Ultra Low Cities scheme that awards funds for:

The Hornsey and Wood Green Constituency Labour Party hosted ‘TACKLING OUR POLLUTED AIR – The Vital Role of the EU’ at St Mary’s School N8. It was chaired by Nicky Gavron of the London Assembly. and discussed:

The ideas will feed in to Sadiq Khan’s consultation on the Ultra Low Emission Zone.

Haringey 40:20 Haringey Climate Forum meeting on air pollution and climate change had a meeting on Monday 14th March. The speakers were: Joanne McCartney, GLA member for Haringey and Enfield; Alison Bell, the council’s air quality officer; Ollie Hayes, Friends of the Earth clean air campaigner. “We now know that pollution causes thousands of premature deaths a year in London. Many of the causes of air pollution are also causes of climate change: diesel vehicles, emissions from industry and fossil-fuel fired power stations, and gas boilers. So there is double the reason for tackling them. What is being done locally? What more can we do locally, and what should we demand from the next Mayor of London?”

The Haringey Green Party reported in March 2016 on their recent monitoring exercise.“every single one of the sites we tested to breach EU limits and some at more than double the legal limit.’ See Haringey Choking on Toxic Pollutants in the Air we Breathe for more and for maps of the exercise results that included:

“Some of the worst polluted sites are close to schools, including primary schools. Near West Green Primary School we measured 60 micrograms per cubic meter, exactly 1.5 times the legal limit. “