Transition members were active during the talks in Paris lobbying the UK Government. On the last day of talks 11th Dec 2015 several members sent emails to Amber Rudd in Paris along the lines of:

As a UK citizen I urge you to act now and keep leading until we have a fair deal that guarantees 100% clean energy and a safe future for all of humanity. 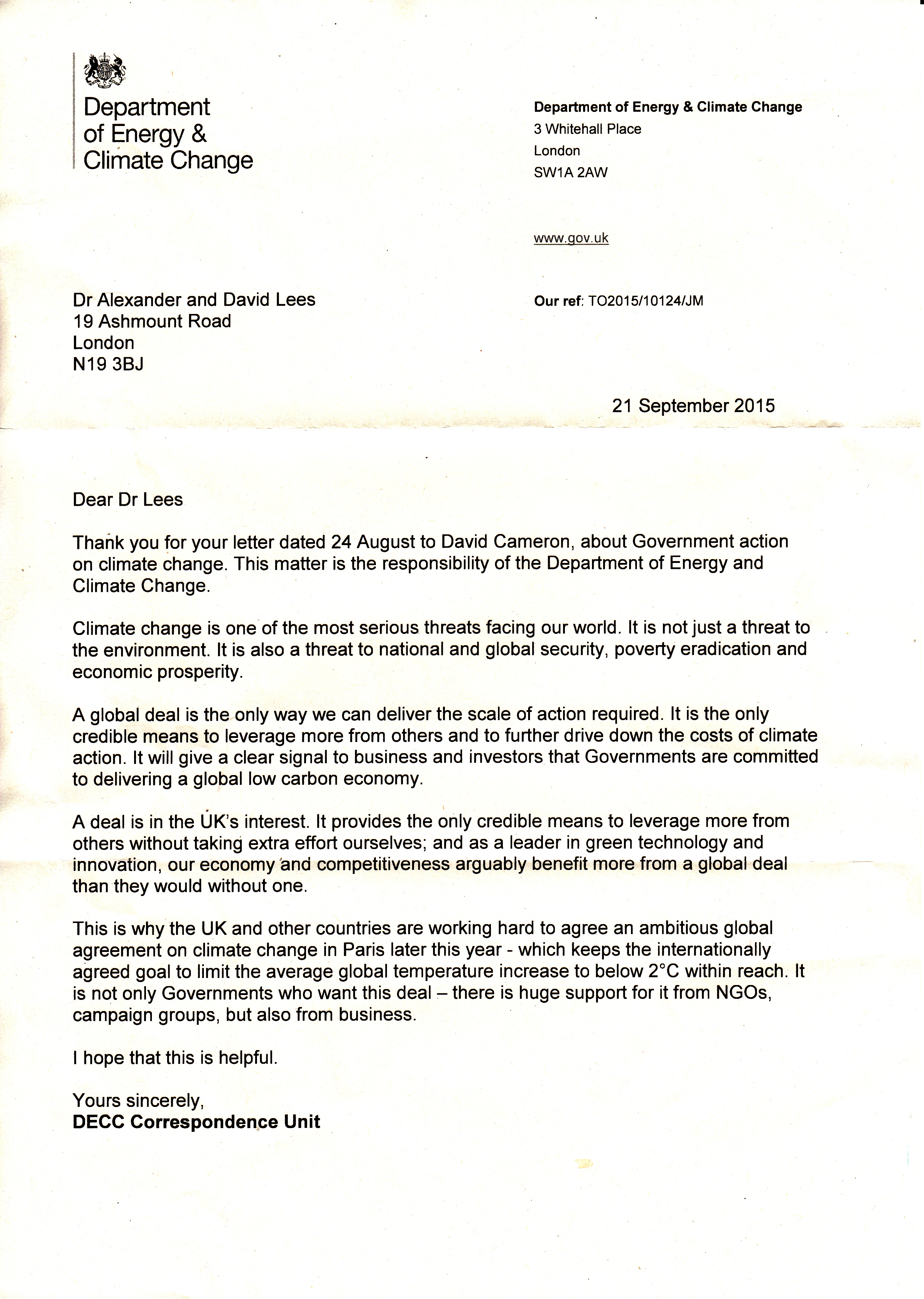 Conclusion – The Government intends to ‘talk the talk’ without ‘walking the walk’, repeating concerned rhetoric, whilst making sure that the UK does as little as possible.

See here for summary of their formal response to the  Committee on Climate Change report to Parliament June 2015. The report stated: “Without significant new policies progress will fall behind what is required to meet legal obligations through the 2020s” and “Without the impact of higher temperatures in 2014, therefore, there is limited evidence of progress reducing emissions outside the power sector.”

On February 14th 2015 David Cameron, Nick Clegg and Ed Miliband signed a pledge put to them by the Climate Change Alliance, to work across Party Lines on Climate Change

On 10th June 2015 there was an Opposition Day debate in Parliament on the topic of Climate Change where the Secretary of State for Energy and Climate Change (Amber Rudd) repeated the pledge:

Huw Irranca-Davies (Ogmore), also mentioned it “ I say to the House today: let’s feel the love! That was the theme of the brilliant and ongoing campaign by the Climate Coalition, supported by hundreds of thousands of people, young and old, including my constituents, who lobbied and lobbied and persuaded the Prime Minister, the then Leader of the Opposition and the then leader of the Liberal Democrats to put their signatures to a climate change pledge brokered by the wonderful and clearly very persuasive Green Alliance, which I had many dealings with in government on the marine Bill, climate change adaption, biodiversity plans, and much more.”

Since that debate there were no signs that all the parties were working together – and the policies since then appear to be unilateral, with opposition along party lines.

Hence HiCAN wrote to ask Amber Rudd to ask how the pledge would be fulfilled.

No mention was made of the cross party Environmental Audit Committee, that has reported on Climate Change previously. As no indication was provided that the Conservatives were working with the best minds in the other parties, the conclusion is that the Government is working along Conservative only lines and are not fulfilling the pledge.

In January 2014 Catherine Budgett-Meakin, with her husband John Mead wrote a letter to the UK political leaders, David Cameron, Ed Miliband, Nick Clegg, Natalie Bennett and Nigel Farage about the need for political leadership on climate change.  The letter was signed by 387 individuals from around the country, acting in their personal capacity.

“This is not a party political issue: it is a moral and ethical matter, bigger and more important than party politics. We need to know that however we vote, the climate change policies will be given the same priority.

And a plea to the politicians:

Please join with each other and speak with one voice:  there are vested interests in our society which will continue to undermine any strategy you might propose; but there are many who long for effective action and will support you.”