The Paris Agreement was signed for the UK by his excellency Lord Bourne of Aberystwyth, Parliamentary Under-Secretary of State for Energy and Climate Change, on 22nd April 2016 and ratified for the UK by Boris Johnson, Foreign Secretary, on 17th Nov 2016.

Currently (March 2019), the UK’s Paris pledge was still the combined EU Intended Nationally Determined Contribution submitted by Latvia in April 2015. It refers to the 2˚C target, now understood to be too dangerous.

This EU INDC pledges a “binding target of an at least 40% domestic reduction in greenhouse gas emissions by 2030 compared to 1990 to be fulfilled jointly”. Although some EU Countries have submitted their own NDCs now, the UK has not, even though it is on the brink of leaving the EU.

At the  Climate Action Summit of Sept 2019 the “UK pledged to double its funding to tackle climate change through overseas development aid to £11.6 billion over the next five years.”

Greenpeace UK said, reported by The Guardian “This is the first big test of Boris Johnson’s climate and environmental leadership on the world stage, and he’s heading for a flop. The collection of pet projects announced here falls desperately short of the radical action and bold vision demanded only last week by millions of kids and grownups in the largest climate protest in history. On protecting wildlife, Newsom said the UK would have a much bigger impact “if it paused trade talks with Brazil until the Amazon is protected while committing to putting environmental and human rights protections at the heart of all future trade deals”. 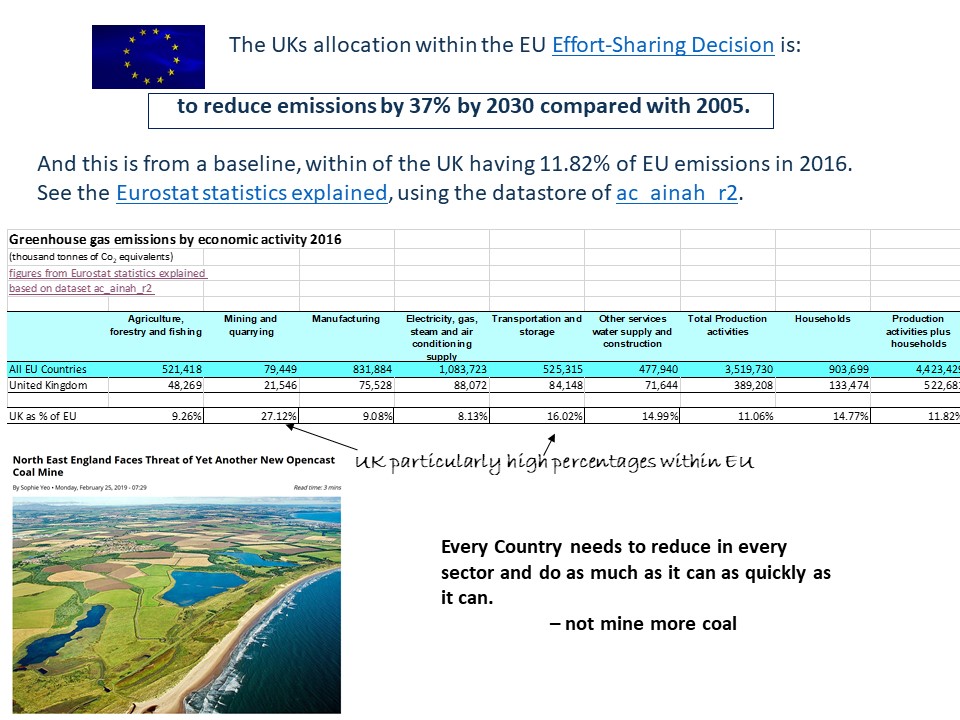 UK Climate Change legislation
The UK manages its emissions reductions through the Climate Change Act 2008 which: “commits the UK to reducing emissions by at least 80% in 2050 from 1990 levels“.

The Committee on Climate Change (CCC) is the independent, statutory body set up to advise the UK Government on reducing greenhouse gas emissions and preparing for climate change. The CCC proposes ‘Carbon Budgets’, which get approved by Parliament, and then need policies and legislation to deliver the reductions.

Impact in the UK of Climate Change caused by global warming

The CCC uses The Met Office’s UK Climate Prediction 2018 report to provide an assessment of what the UK will experience from the changing climate: rising sea levels; increased temperatures (higher in the summer than the winter); and changing patterns of rainfall. This is summarised in Michael Gove’s speech at its launch.