What Are We Doing Globally?

The UN has provided leadership on Climate Change for decades. IPCC has produced 5 reports The IPCC 2014 Fifth Assessment Report contains this definitive statement:  “SPM 1.Observed Changes and their Causes
Human influence on the climate system is clear, and recent anthropogenic emissions of green-house gases are the highest in history. Recent climate changes have had widespread impacts on human and natural systems.”

The mitigation section III contains:  “The ultimate objective…… stabilization of Greenhouse Gas concentration in the atmosphere at a level that would prevent anthropogenic interference with the climate system. Such a level should be achieved within a time frame sufficient to allow ecosystems to adapt naturally to climate change, to ensure that food production is not threatened and to allow economic development to proceed in a sustainable manner.”

The report looks at many scenarios, with the baseline where we take no action and continue at current emission levels.

“Mitigation scenarios in which it is likely that the temperature change caused by anthropogenic GHG emissions can be kept to less than 2°C  relative to pre-industrial levels are characterized in 2100 by atmospheric concentrations of 450ppm CO2 eq.”

France hosted UNFCCC (or ‘COP21)  30th Nov to 11th December in Paris and succeeded in agreeing the formal Adoption of the Paris Agreement 12th Dec 2015.

To quote from Avaaz “World leaders at the UN climate talks have just set a landmark goal that can save everything we love! ” To see the full Avaaz announcement click We did it! — A turning point in human history

See see Carbon Briefs initial assessment of the agreement here. Also see a Quick Guide to the Paris Agreement from The Conversation.

The agreement can also be downloaded from the UN library. It has to be understood in parallel with the Intended National Determined Contributions  (INDCs) (explained by the Carbon Brief . The Guardian goes into more depth on the most important submissions.

See the July 2015 ‘Our Common Future under Climate Change – Outcome Statement‘ from the  Scientific committee. “Cost-effective mitigation pathways to limit warming to 2°C require reducing emissions of greenhouse gases by 40–70% below current levels by 2050.” The conference was reported by Carbon Brief.

The aim is that (cumulatively) the INDC pledges would be sufficient to avoid dangerous carbon increases, but by the end of COP21 they were (cumulatively) too low from 185 out of 196 countries.

Assistance to ‘Developing countries’ to enable them to minimise emissions

“Another key objective of the COP21 was the mobilization of $100 billion per year by developed countries, from public and private sources, from 2020.” See PARIS – Who Parties and Groupings for more details of the funds to be directed at Developing Countries.

The UN also commissioned Livestock’s Long Shadow to “raise the attention of both the technical and the general public to the very substantial contribution of animal agriculture to climate change and air pollution, to land, soil and water degradation and to the reduction of biodiversity.”

The World Trade Organization ruled in Feb 2016, according to the Huffington Post on “India’s National Solar Mission, deciding that India’s efforts to boost local production of solar cells violated WTO rules. [in order to benefit from the government-subsidized program] Though India argued that the program helps the country to meet its climate commitments under the United Nations Framework Convention on Climate Change (UNFCCC), the WTO rejected that argument. Indeed, the ruling boldly states that domestic policies seen as violating WTO rules cannot be justified on the basis that they fulfill UNFCCC or other international climate commitments. In effect, the WTO has officially asserted that antiquated trade rules trump climate imperatives.”

It was also noted that the proposed Trans-Pacific Partnership trade deal (TPP) would also follow the same principle.

The US is leading the Clean Energy Ministerial which includes action on many fronts, led by and participated in by countries all over the world. The US is designated lead on eight aspects. The UK is named as participating in four, as shown below. 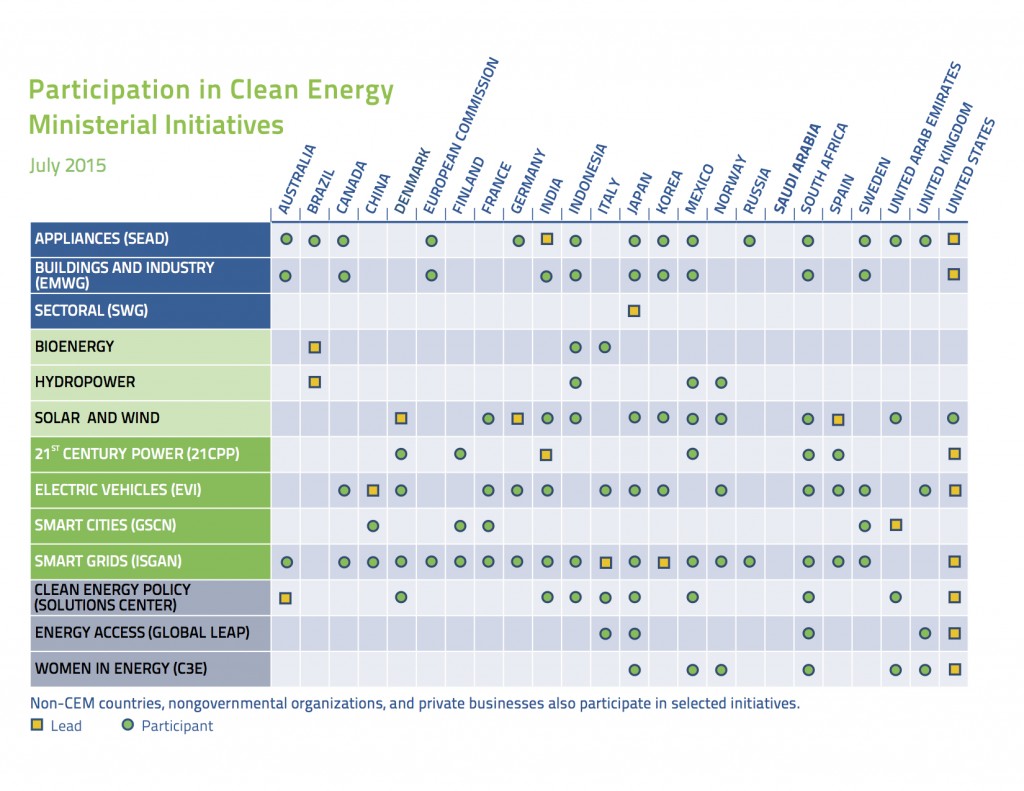 In Sept 2016 Jeremy Leggett reported that 16 US cities had signed up to 100% of their power from renewables and Aspen, Colorado; Burlington, Vermont; Columbia, Maryland and Greensburg, Kansas  had already achieved it.

In  Redrawing the Energy Climate 2013 the IEA equates the target to be a maximum of 450ppm of carbon and carbon equivalent in the atmosphere by 2100. It states that “…the energy projections in the new policies scenario are consistent, other things being equal, with a 50% probability of an average global temperature increase of 3° by 2100 ……. This compares with 1.9° by 2100 and 2° in the long term in the 450 scenario.”

The International Energy Authority in Redrawing the Energy Climate reports that “fossil fuel subsidies amounted to $523 billion,  around six times the level of support to renewable energy.

According to energiogklim in August 2017 the IEA has consistently underestimated the amount of renewables as a source of electricity. “Both the nuclear power and coal power are counted threefold relative to the solar power plant, taking into account that about three units of coal or nuclear energy are needed to make one unit of power.”

According to Sourcewatch the European Union Large Combustion Plant Directive sets emission standards for member countries for nitrogen oxides, sulphur dioxide and particulates from all power stations with an installed capacity greater than 50 megawatts. Under the directive legislation power stations that don’t meet the specified emission standards must either retrofit appropriate pollution control equipment or close down. Under the directive, plants that ‘opt out’ of meeting the new standards can operate for a maximum of 20,000 hours after January 2008 and, at the latest, must be shut down by 2015.

The EU mandates Air Quality standards across member Countries “The Commission has adopted a Clean Air Policy Package in December 2013, consisting of A new Clean Air Programme for Europe with new air quality objectives for the period up to 2030, a revised National Emission Ceilings Directive with stricter national emission ceilings for the six main pollutants, and a proposal for a new Directive to reduce pollution from medium-sized combustion installations.”

However Air Quality News reported in March 2016 that the limits for nitrogen oxide (NOx) emissions for diesels would be temporarily raised following a ruling in Oct 2015 that was welcomed by European car manufacturers. The ruling approved “A new RDE (Real Driving Emissions) test procedure was set out by the EU’s Technical Committee on Motor Vehicles last October with the aim of better reflecting the actual air pollution emissions from cars driving on roads compared to the existing lab-based tests.” and increased the allowable limits to enable more cars to pass (at levels that had previously been illegal).

“the European Council should ensure the 2030 policy framework re-energises the drive to complete the internal energy market in order to maximise the cost-efficiencies resulting from increasing market integration and inter-connection, facilitate the increase of low carbon generation and increase Europe’s energy security.”

Approach to PARIS  ‘COP21. Amber Rudd (Sec of State for Department of Energy and Climate Change) re Queens speech May 2015

“The summit in Paris in December is the best opportunity for years to get comprehensive, rules based agreement that keeps the objective of limiting global warming to 2 degrees in reach. The three biggest carbon emitters, the EU, US and China are all determined to get a deal done.

A global deal is the only way we can deliver the scale of action required – and it is strongly in the UK’s interest. A global deal provides the only credible means to leverage more from others and would further drive down the costs of climate action.

UK Government policies re International Action in the form of a report from the  Committee on Climate Change (CCC).

Carbon Brief lists all the contributions from the Dept for International Development (DIFD), DECC and DEFRA. This includes £3.87bn between 2011 and 2016 for the International Climate Fund (ICF) Implementation Plan. [Chart by Carbon Brief], largely included in the .07% the UK spends on Foreign Aid.

The spend includes the Green Climate Fund where the UK has pledged £720m “The Fund will contribute to the achievement of the ultimate objective of the United Nations Framework Convention on Climate Change (UNFCCC)…….. the needs of those developing countries particularly vulnerable to the adverse effects of climate change.” See GCF Tracker for latest pledges.

These were for general (multilateral) pots, but the UK also spent £459m on specific projects in specific countries (bilateral). These are also detailed in the Carbon Brief analysis and include money for Forestry, Mitigation and Adaptation.

See the Friends of the Earth assessment on the UK’s contribution as being unfair.