For a real time view of the COP21 negotiating text Carbon Brief have published their ‘bubble‘.

Carbon Brief also have a list of all of the first day speakers. Game changing announcements included one from India that offered some hope of a change from the coal stance of this major emitter and from global business leaders seeking to use their influence and resources to lower greenhouse gases.

The Indian Prime Minister, in conjunction with the French announced an International Solar Alliance “Modi said the aim was “to bring affordable solar power to villages that are off the grid”….. “The alliance [intended 100 countries] hopes to mobilise “more than $1,000bn of investments that are needed by 2030 for the massive deployment of affordable solar energy“….. “Hollande said. “Wealth tomorrow will come from new energies that will be developed everywhere and, namely, solar.”

Business billionnaires announced “The group of 28 investors — which includes Microsoft’s Bill Gates, Facebook’s Mark Zuckerberg and Amazon’s Jeff Bezos — have pledged to support early stage technologies, helping them to get off the ground at a time when other investors may be put off by the high risk factor involved.”  ‘Mission Innovation‘ consists of  20 participating countries [including the UK] who “will seek to double its governmental and/or state-directed clean energy research and development investment over five years.” and a ‘Breakthrough Energy Coalition‘ of the business leaders. See more at Making Clean Energy Affordable.

Schwarzenegger, Republican ex Govenor of California, joined by his Democrat successor at the COP pushed the view that people would support action if they understood the dangers already unfolding – future dangers were too distant to respond to.

The Transition Highgate/HiCAN contingent attended the London Climate Change march on the 29th Nov 2015, mingling with other local groups and thousands of other marchers. See photos. 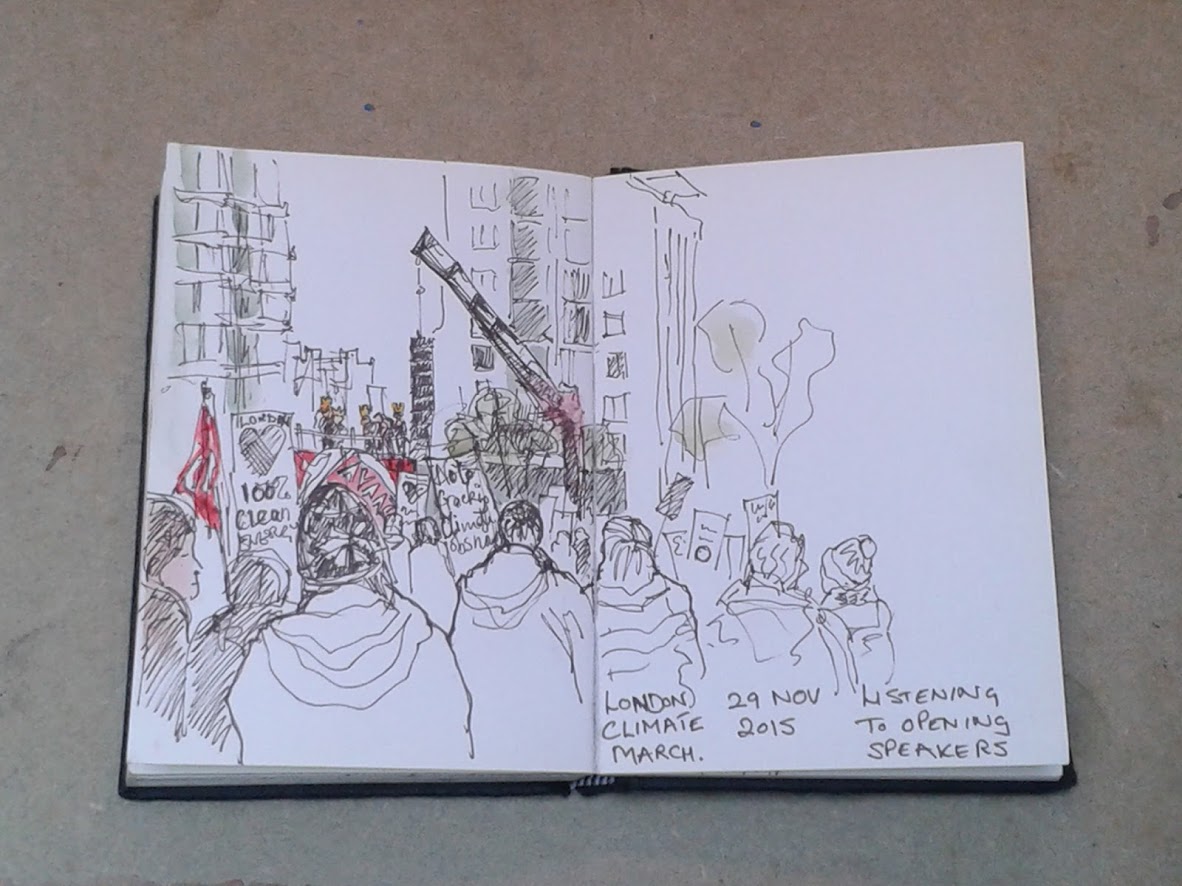 Our view of the speeches – courtesy Susan Lees

On the same day there were thousands of marches around the world with more than half a million people according to the BBC.

There was no official march in Paris, due to recent events, but there was an unofficial advertising campaign critiquing corporate sponsors.

“The alliance hopes to mobilise “more than $1,000bn of investments that are needed by 2030 for the massive deployment of affordable solar energy.”

« St Pancras International. A greeting for COP21 delegates » What can any of us do about climate change?