To deliver more power we do need to make huge investments. To deliver the low carbon power we need we must direct funds away from high carbon and towards low carbon. However, “The G20 countries alone spend over three times as much public money on oil, gas and coal than the whole world does on renewable energy……. In 2014, subsidies for fossil fuel production in the UK reached £5bn…… the government announced a further £1.3bn in tax breaks for oil companies. (Guardian 2nd Feb 2016) See below for who subsidises what.

At the COP21 in Nov 2015 Carbon Brief reported that John Key, the prime minister of New Zealand, used the first day of COP21 to officially present the Fossil-Fuel Subsidy Reform Communiqué. This was supported by 37 countries, 23 global companies and organisations, such as the International Energy Agency, the OECD and World Bank“We invite all countries, companies and civil society organisations to join us in supporting accelerated action to eliminate inefficient fossil-fuel subsidies in an ambitious and transparent manner as part of a major contribution to climate change mitigation.”

“Christiana Figueres said that “we need to dispel the myth that you have to choose between burning carbon and development, the myth that with only this type of subsidy can you benefit the poor”.

What is a Subsidy?

Fossil fuel subsidies can also come in many different forms, which can lead to significant discrepancies in their estimates. For example, the International Energy Agency (IEA) focuses largely on subsidies that have a direct impact on the consumer, whereas the International Monetary Fund (IMF) includes those aimed at producers, such as tax relief and the cost of carbon.”

Alliance Trust article on Sub-si-dy again:“Historically, fuel subsidies have been part of policy intervention mechanisms designed to protect the lower-income part of the population from highly volatile commodity prices….” and “A recent World Bank paper agrees-  “in low and middle-income countries, the richest 20% received six times as much from fossil fuel subsidies as the poorest 20%.”  A fair conclusion is that as a social welfare tool, it is clearly failing.”

It is politically difficult to remove subsidies once in place, and the Global Subsidies Intitiative explains that: “The biggest challenges tend to cluster around:

1) The impacts of higher prices on households, particularly those under or near the poverty line;

2) Loss of industrial competitiveness, where energy intensive industries are reliant on cheap fuels or electricity;

3) Poor levels of public understanding of the scale of fossil-fuel subsidies, how the benefits are distributed, and the opportunities that reform offers for investments in education, healthcare, renewable energy, etc.”

How much is spent on supporting fossil fuels, compared with renewables?

The International Energy Agency (IEA)’s report World Energy Outlook 2015 reports that “Fossil-fuel consumption continues to benefit from large subsidies: we estimate this global subsidy bill at around $490 billion in 2014” slightly down from the World Energy Outlook 2014 report that “Fossil-fuel subsidies totalled $550 billion in 2013 – more than four-times those to renewable energy – and are holding back investment in efficiency and renewables” and “Renewable energy technologies, a critical element of the low-carbon pillar of global energy supply, are rapidly gaining ground, helped by global subsidies amounting to $120 billion in 2013.” and  “As the share of wind and solar PV in the world’s power mix quadruples, their integration both from a technical and market perspective becomes more challenging, with wind reaching 20% of total electricity generation in the European Union and solar PV accounting for 37% of summer peak demand in Japan.” 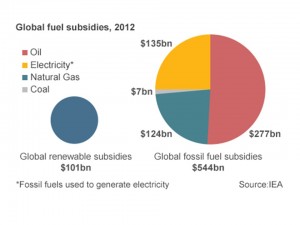 Subsidies across the World

The Guardian published an interactive tool in Nov 2014 to show how Governments across the world subsidise exploration for more fossil fuel.

Click on the country flag of 10 of the countries to see where they were directing their funds in the search for fossil fuels, with further details of the $88bn a year that ‘rich countries’ are subsidising oil, gas and coal companies.

What do Global Bodies say about Subsidies?

IMF 2015 update.  “Energy subsidies are projected at US$5.3 trillion in 2015, or 6.5 percent of global GDP, according to a recent IMF study. Most of this arises from countries setting energy taxes below levels that fully reflect the environmental damage associated with energy consumption.”

IMF Direct discusses “The IMF has long argued that getting energy prices right can help national governments achieve their goals not only for the environment but also for inclusive growth and sound public finances.  Increasing energy prices gradually and predictably to reflect their true costs would generate fiscal gains of about 3½ percent of GDP. The fiscal gains are less than the total amount of subsidies (6½ percent of GDP) because higher prices would drive down energy consumption.”

The World Bank’s Decarbonizing Development   “Removing fossil fuel subsidies, which primarily benefit the wealthy, and implementing carbon taxes or cap-and-trade systems are two ways to free up or generate revenue that can lower costs of education, health care, and infrastructure and provide direct support for the poor while also reducing carbon emissions.”

What is being done Globally to address subsidies?

According to Carbon Brief 9th June 2015″The G7 leading industrial nations have agreed to cut greenhouse gases by phasing out the use of fossil fuels by the end of the century, the German chancellor, Angela Merkel, has announced, in a move hailed as historic by some environmental campaigners. The G7 also agreed on a global target for limiting the rise in average global temperatures to a maximum of 2C over pre-industrial levels, but stopped short of agreed immediate binding targets.”

The Guardians George Monbiot in Feb 2016 says that, as well as £5bn subsidy for fossil fuel production in the UK, the government had now announced £1.3bn of tax breaks for North Sea oil companies, £250m for propping up oil and gas and £20m on seismic testing, noting that the free market and anti-lobbying expectations for renewables is in contrast to the rules for fossil fuels. ” according to the International Monetary Fund, more money is spent, directly and indirectly, on subsidising fossil fuels than on funding health services. The G20 countries alone spend over three times as much public money on oil, gas and coal than the whole world does on renewable energy.”

” The Overseas Development Agency and Oil Change International reportsays lists the ways in which the UK subsidises exploration, production, decommissioning and clear up of fossil fuel industries through tax breaks and favourable financing.

The ODI Broken Promises report (Nov 2015) explains at Box 5 that the Wood Review was tasked with encouraging exploration for oil and gas in the North Sea and reducing the cost to operators of decommissioning oil and gas rigs. As a result taxes have been reduced, estimated at $2.7bn between 2015 and 2020 for oil and gas. The intention is to be equally generous to Shale producers when they produce gas. (as well as incentives to kick start the industry)

The report says that”Despite national and international commitments by the UK government to phase-out subsidies for fossil fuels, the country has recently ramped up support for on- and offshore oil and gas production. At the same time support for renewables and energy efficiency measures…. has been cut”

Subsidies through polluters not paying for health costs.

£2.2bn is spent on decommissioning Nuclear out of the DECC Budget (including Military, with another £41m for Nuclear Security) according to Carbon Brief May 2015.

Nuclear is also ‘subsidised’ as part of the Capacity Market Auction, which resulted in a price of £19.40 per kilowatt (kW) being agreed as a subsidy.  Reported by The Guardian in Dec 2014 “Consumers will need to stump an extra £1bn a year in 2018 to encourage power stations to stay open and keep the lights on, the government confirmed on Friday…….68% of the capacity is to be provided by existing power stations and only 5% by new build.” The Keep FITS org compares Nuclear subsidies against Solar subsidies.

The UK subsidises some individual renewable power investments via the Levy Control Framework eg Feed In Tariffs for solar photovoltaic and some via ‘strike price’ guarantees.

The Levy Control Framework supports investment in renewables through Renewable Obligations (RO) and Feed-In-Tariffs (FITs), managed by Decc and the Treasury. According to a National Audit Office report the cost in 2011 for Renewable Obligations was £1,458m and for Feed In Tariffs was £151m.

However the LCF also includes measures for social purposes eg Warm Home Discount (£238m in 2011) to help vulnerable consumers with their electricity bills and excludes (Energy Company Obligation (ECO) that subsidises insulation for low-income households and the Capacity Market mechanisms. (note that it also excludes the Renewable Heat Incentive (RHI) that is funded separately). Therefore, it notes that it is difficult to compare costs and outcomes across all initiatives.

“The spending cap under the Levy Control Framework is set to rise from £2 billion in 2011-12 to £7.6 billion in 2020-21 (in 2011-12 prices).” Decc  predict that, by 2020 FITs could cost £4.84bn and ROs £1.6bn.   As at July 2015 the Government is intending to reduce RO and FIT ‘subsidies’  as they say that “Our support has driven down the cost of renewable energy significantly. As costs continue to fall it becomes easier for parts of the renewables industry to survive without subsidies. We’re taking action to protect consumers, whilst protecting existing investment”.

By November 2016 it was accepted that the LCF would be exceeded (by typically £17 more per consumer per year) and the National Audit Office (NAO) published Controlling the consumer-funded costs of energy policies: The Levy Control Framework.

The Solar Century report on this countered media accusations that renewable subsidies were to blame for the overspend. Although Solar only accounted for 6% of the LCF there had been no transparency on the precise figures, resulting in the Court ruling prior to the FIT cuts that the Government was allowed to use the LCF as a legitimate reason to cut solar support.

Trillion Fund explains how renewables and Nuclear are supported.

“The idea is that the Government promises a fixed price per megawatt hour (MWh) for the energy a wind farm, tidal array and more controversially, a nuclear plant, sells. If the cost of electricity on the market falls below this price, the Government effectively tops up the difference to the renewable supplier.

In energy markets, the cost of power varies on a daily basis. So a fixed or ‘strike’ price, underpinning this market, means companies, potentially risking millions to develop new renewable electricity plants, can predict more comfortably to shareholders and customers how much money they will eventually make when the project is built.”

The  National Grid “confirmed… that it had secured the 45 gigawatts (GW) of back-up power generation it wants to meet peak periods of electricity demand starting in 2019. Bidders of gas, nuclear and diesel-fired plants agreed a price of £18 per kilowatt-year (8,760 kilowatt hours)…… energy companies had won contracts to build 650MW of new diesel-driven capacity at a cost of about £175m….gas-fired power stations won half of the contracts on offer but no energy companies put forward plans to build new gas facilities as the government had hoped…There were also deals for an unspecified number of coal-fired power stations”

How much do energy customers pay for new renewable power?

According to Carbon Brief  Ofgem estimated at the end of 2012 that the levies added about £107 to consumer bills – making up eight per cent of an average 2012 annual bill.

“Over the last ten years, wholesale electricity costs have risen by around 140 per cent, accounting for 60 per cent of the rise in household energy bills between 2010 and 2012.”

Carbon Brief used Decc 2013 figures to show that the investments made from ‘green subsidies’ will reduce costs for energy users by 11% as at 2020. 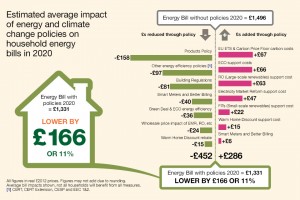 However, these figures that domestic energy customers pay seem to be considered separately to the subsidies tax payers pay. Though frequently the same people it is difficult to compare subsidies across all fuel sources per UK person. This leaves the question as to why subsidies to fossil fuel energy sources far far outstrip those for renewables unanswered.