“Calder Hall was a marvel of British engineering. It was constructed using machine tools developed for aeroplanes and tanks during the Second World War.”

But, in 1956, little thought was given by the nationally owned Central Electricity Authority to the risks from Nuclear materials used in Nuclear Fission, or the costs of handling them in use or disposal.

In April 2016 the Toxic Time Capsule report was published by the Intergenerational Foundation  studying the costs and risks of Nuclear compared with Wind and Solar and concluded that:

Fusion an alternative to Fission?

In October 2019 The Guardian published a review of the likely path to have electricity produced by Nuclear Fusion, instead of Fission.

The National Audit Office, in July 2016 (table 12) Nuclear Power in the UK shows that the cost per MWh is lower for solar and onshore wind than for Nuclear.

Cost of new Nuclear compared with new Wind and Solar

The Toxic Time Capsule table shows that “A highly conservative estimate puts the additional cost of power from Hinkley Point C for its 35year initial contract period, compared to onshore wind and solar power, at £31.2 billion and £39.9 billion respectively.”

These were based on a ‘Strike Price’ of £92.5 MWh whereby, for the first 35 years (protected against inflation), the operators would receive the difference between the wholesale price (3.7p kWh at that time) and the strike price (ie 9.25p kWh) .

“Dr Paul Dorfman of the Energy Institute at University College London, described it as a subsidy (which the then Coalition government had ruled out) equivalent to £800m to £1 billion per year going from UK taxpayers and energy consumers to state-controlled Chinese and French corporations.“

As at 28th July 2016 contracts for Hinkley Point C were suddenly delayed, awaiting a UK review in controversial circumstances. See Carbon Brief for more detail. According to the Guardian in March 2016 if the UK Government “permanently prevents the construction…..” of Hinkley Point C it could trigger a ‘poison pill’ compensation of £22bn!!!!! It is not clear whether failure to sign the current contract offered by EDF would incur this astronomic compensation for UK Taxpayers/billpayers to find.

This ‘Contracts for Difference’ guarantee would be from the same bill payer contribution as for solar feed-in tariffs. The report notes that figures for Nuclear necessarily contain many enormous assumptions and unknowns. Nevertheless it points out significant figures for UK Nuclear on top of the contracts for difference costs.

Additionally, according to George Monbiot in Sept 2015 “The National Audit Office said earlier this year that UK infrastructure guarantees are “up to £17 billion for Hinkley Point C nuclear power plant”..” 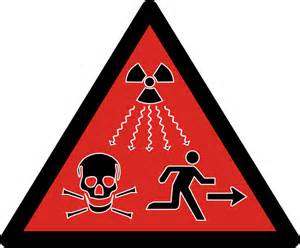 Effects to life of radiation from exposure to nuclear material

The main risk from using radioactive materials to generate electricity (but also for weapons) is described by Wikipedia as “exposure to radiation causes damage to living tissue; high doses result in Acute radiation syndrome (ARS), with skin burns, hair loss, internal organ failure and death, while any dose may result in an increased chance of cancer and genetic damage; a particular form of cancer, thyroid cancer, often occurs when nuclear weapons and reactors are the radiation source because of the biological proclivities of the radioactive iodine fission product, iodine-131 ”

These risks apply throughout the whole lifecycle from mining to disposal, requiring costly safety measures and recovery from exposure incidents. According to the World Nuclear Association’s report ‘Safety of Nuclear Power Reactors’ (updated Aug 2015) “There have been three major reactor accidents in the history of civil nuclear power – Three Mile Island , Chernobyl  and Fukushima.” The report notes a very low level of death of workers from Nuclear compared with Coal Mining and Hydro (dams bursting), although omitting subsequent deaths from radiation in Japan and Chernobyl for instance.

“Following the Fukushima disaster, in 2012 French public safety authorities overseeing nuclear risks put the cost of a serious incident at upwards of €540 billion.”……“A Japanese government estimate in 2011 put the cost of the Fukushima reactor disaster at around ¥5.8 trillion ($60 billion), but this was revised upwards in 2014 by a Japanese academic study to ¥11.1 trillion ($106 billion).”… “The Japanese Centre for Economic Research gave an upper range of total costs that was nearly double even this higher figure, reaching ¥20 trillion.”

State Impact Pennsylvania said in March 2014  “I think as adults we have to come to grips with the fact that we’ve created a hazardous waste site and we’ll have to guard it—isolate it—for hundreds, if not thousands of years…… In the years since the accident, no new plants have been commissioned in the United States, and regulatory oversight has increased, according to Neil Sheehan a spokesman for the U.S. Nuclear Regulatory Commission.”

Although the risks of Nuclear meltdown may be very small it has happened before but the consequences in terms deaths, damage, power shortages and financial ‘open chequebook’ are enormous.

Risks of Terrorism
[extracts re identified aspects of Nuclear terrorism]

“where a black market in nuclear materials exists, and expansion of nuclear power will pass an even less secure world on to future generations.”… “The reprocessing system now used in Europe, Japan, and Russia that involves separation and recycling of plutonium presents unwarranted proliferation risks”….. “…..nuclear security measures, which can include covering everything from state-sponsored espionage and proliferation to terrorist threats”…… “Terror-related dangers range from radiological dispersal devices, known as “dirty bombs,” attacks on nuclear installations, and improvised nuclear devices stemming from either military or civil nuclear sources”…..”it would be likely to worsen an already unstable international security situation.”

Risks of lights going off – Intermittency and Predictability

Nuclear is regarded as a ‘baseload’ ready to provide power when there is no wind or sun. However the full range of renewable energy sources, between them can be suited to this role. Whereas Nuclear is “a comparatively inflexible energy which is hard to turn on and off and requires a particular type of energy grid to give best value, which differs from the kind of infrastructure that optimises the potential of renewable energy.” Nuclear can still have problems with reliability.  “Conventional power generation, also has problems with “intermittency”, as coal stations can be down for six and a half weeks a year and Nuclear can be closed for long periods”. Nuclear operations can be affected by heat waves, that are becoming more frequent.

George Monbiot supports Nuclear power for this reason (Sept 2015): “Because atomic energy provides a steady baseload of electricity, it has great potential to balance the output from renewables, aiding the total decarbonisation of the power supply. The dangers associated with nuclear power have been wildly exaggerated, all too often with the help of junk science. Climate breakdown presents a far greater hazard to human life. The same goes for the air pollution caused by burning coal.” (note GM does not believe that the Hinkley proposals are value for money)

However, hydropower,, enhanced geothermal systems, power from biomass; concentrated solar with heat storage and tidal lagoons are predictable and ‘dispatchable’ (can be made available quickly). Studies and proposals to evolve the power distribution infrastructure include Jacobson and Delucchi  who say that, globally and nationally, we can provide all global energy with wind, water, and solar power in Providing all global energy with wind, water, and solar power, Part I. The Toxic Time Capsule points out that Nuclear “requires a particular type of energy grid to give best value, which differs from the kind of infrastructure that optimises the potential of renewable energy..”  Whereas the UK National Infrastructure Commission (NIC) report Smart Power in March 2016 that says that power will become more localised and 2-way, requiring more interconnection, storage, and demand flexibility.

To maintain the energy supplies to avoid UK people having their ‘lights turned off’ new sources of electricity are needed quickly to replace fossil fuel sources. The reliance of Nuclear in the Nov 2015 Government policy ‘New Direction for Energy Policy‘ for a new fleet of Nuclear powered Power stations is not quick or cheap for billpayers and tax payers.