What is happening that the Mayor can control?

The schemes here, to increase clean transport, buildings and energy, can be controlled directly by the Mayor.

For schemes that the Mayor can only encourage London Boroughs to implement see ‘What are Boroughs, Companies and Voluntary Groups doing?’.

At the time of the London Mayoral election in May 2016 there was a London-wide Low Emission Zone (LEZ) for heavy duty vehicles, a central Congestion Zone for general vehicles and a programme of new cycling routes. Plans were in place for a Ultra Low Emission Zone (ULEZ) in 2020 and TfL was working on schemes to encourage electric/hybrid Buses and Taxis. 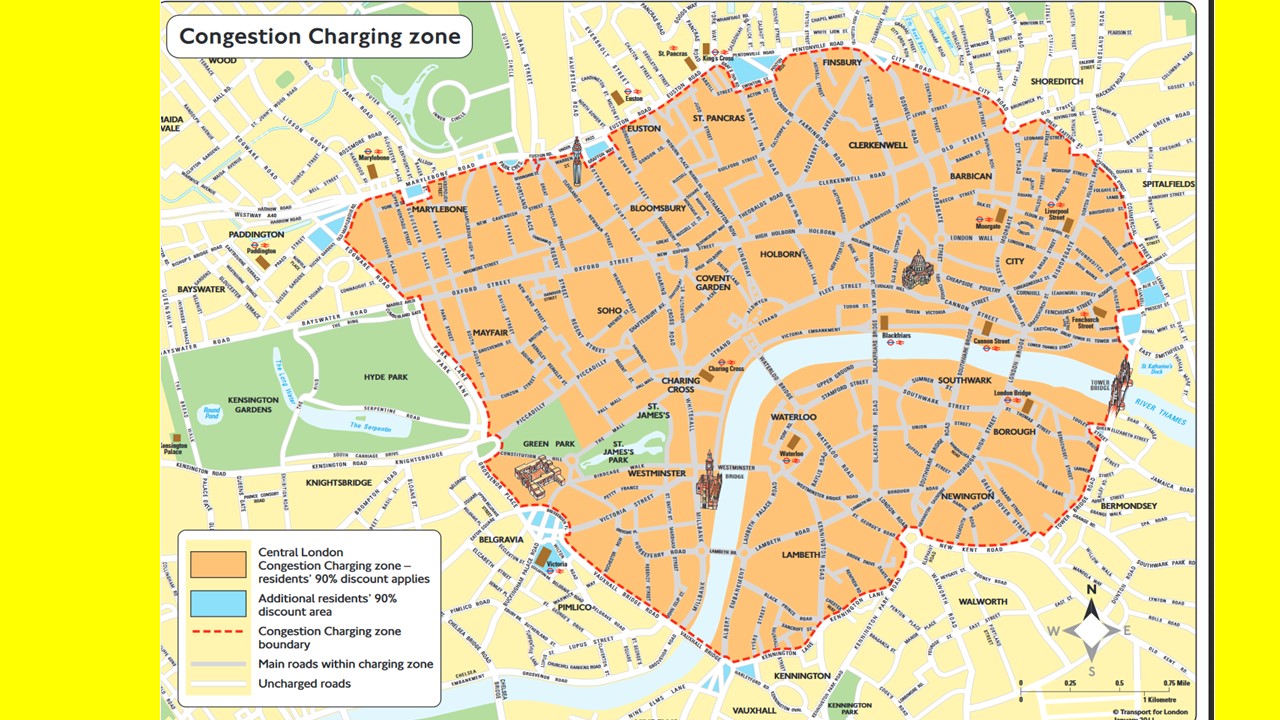 Congestion Zone, whereby all vehicles have to pay £11.50 daily charge Monday to Friday between 07:00 and 18:00, Monday to Friday. There is no charge on weekends, public holidays, between Christmas Day and New Year’s Day inclusive, or between 18:00 and 07:00 on weekdays. Exemptions include Electric Vehicles, Taxis, Vehicles with 9 or more seats, Buses, motor bikes, disabled vehicles. Residents receive a 90% discount.

This was planned to be the same size as the current congestion zone and to be implemented in 2020.

TfL’s July 2015  Ultra Low Emissions Vehicle (ULEV) Delivery Plan for London explains (at p3) that the Ultra Low Emission Zone (at App 4) would be “transforming London’s public and commercial fleets; delivering zero emission taxi and private hire fleets; transforming London’s bus fleet; and an action on ‘Driving the uptake of Low Emission Vehicles’. But it explains that it depended on the Mayor, TfL, the London boroughs, the government, the EU and other parties to bring this about.

However the new Mayor consulted in July 2016 wishing to bring this forward to 2019. 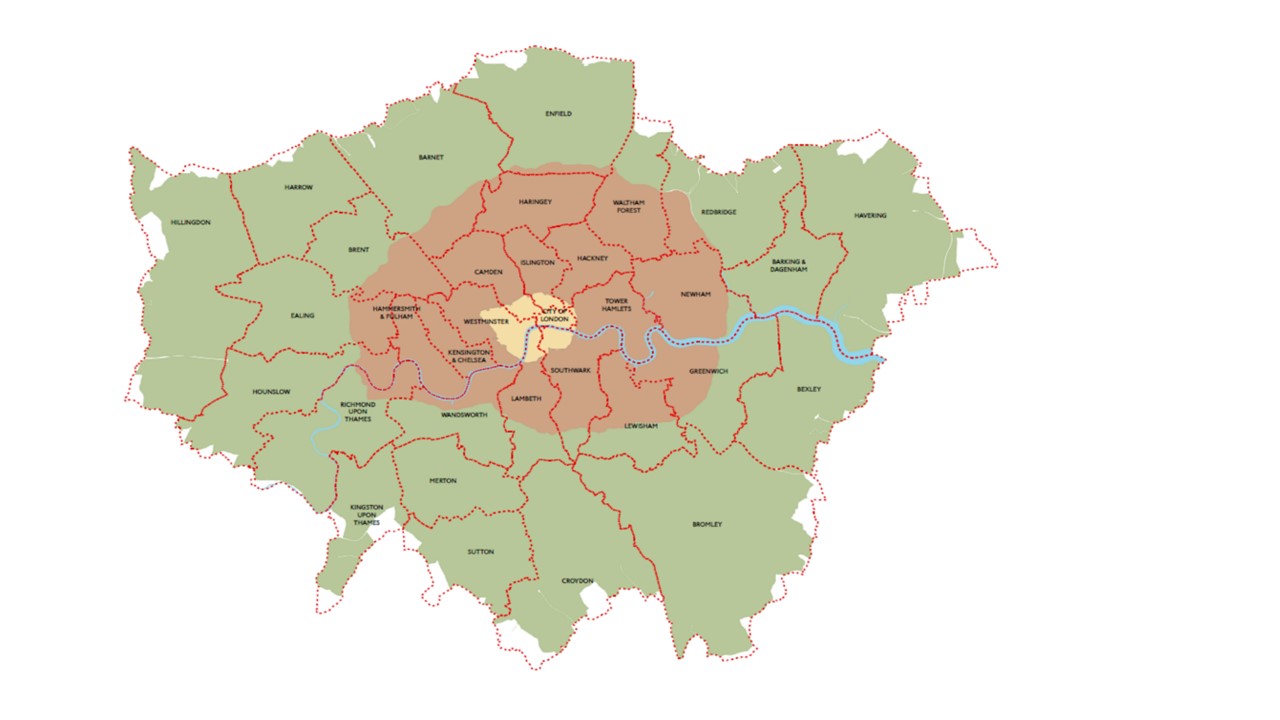 Options included expanding the zone, either to the North and South circulars or around the whole of Greater London, as shown.

Mapbox has an interactive ‘geofencing’ boundary that can be used to consider other zone boundaries.

From 2017 older, more polluting vehicles would be charged £10 a day emissions surcharge to enter the original congestion zone. The new Mayor also called on Government Ministers in March 2016 to introduce a diesel scrappage scheme to help clean up London’s air.

Do these Zones work? There seems to be little information about the intention and success factors of the original congestion zones, or for the currently planned ULEZ. In 2007, CCLondon reported in The London Congestion Charge: Consequences: “Transport for London have recorded falling particulate levels within the original congestion charge area and along the Inner Ring Road boundary zone. Nitrous Oxide (NOx) fell 13.4% between 2002 & 2003 along with similar falls for Carbon Dioxide (CO2) and Particulate Matter (PM10)“

So it is not clear whether the new plans are ambitious enough to really reduce carbon emissions and air pollution to safe levels, particularly as diesel vehicles have increased in numbers significantly since then across the whole of London.

During Boris Johnson’ mayoralty a network of Cycling Super Highways was created, encouraging people to travel around by bike.

TfL announced a consultation in Aug 2016 for a new Cycle Superhighway (route 11) from Swiss Cottage to Portland Place.  “As part of a network of Cycle Superhighways across London, CS11 would improve conditions for existing cyclists and help make cycling attractive to more people. “ 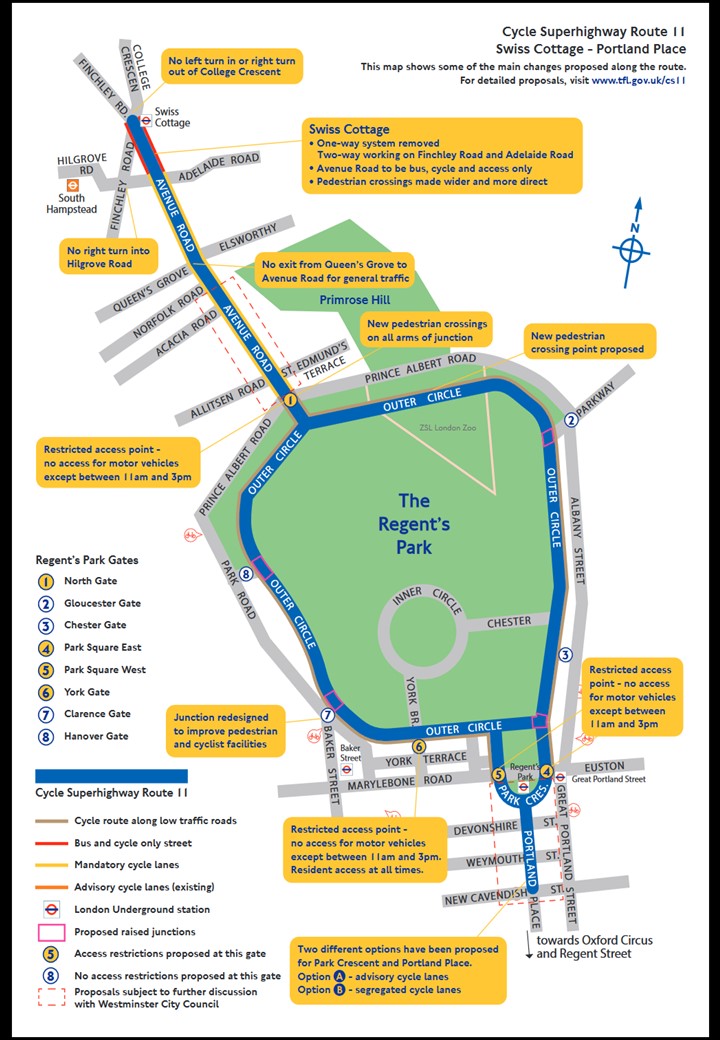 And Cycle Superhighway from Stonecutter St to Kings Cross (CS6) was given the go-ahead on 1st Sept 2016 according to the Evening Standard with a commence date of Spring 2017. 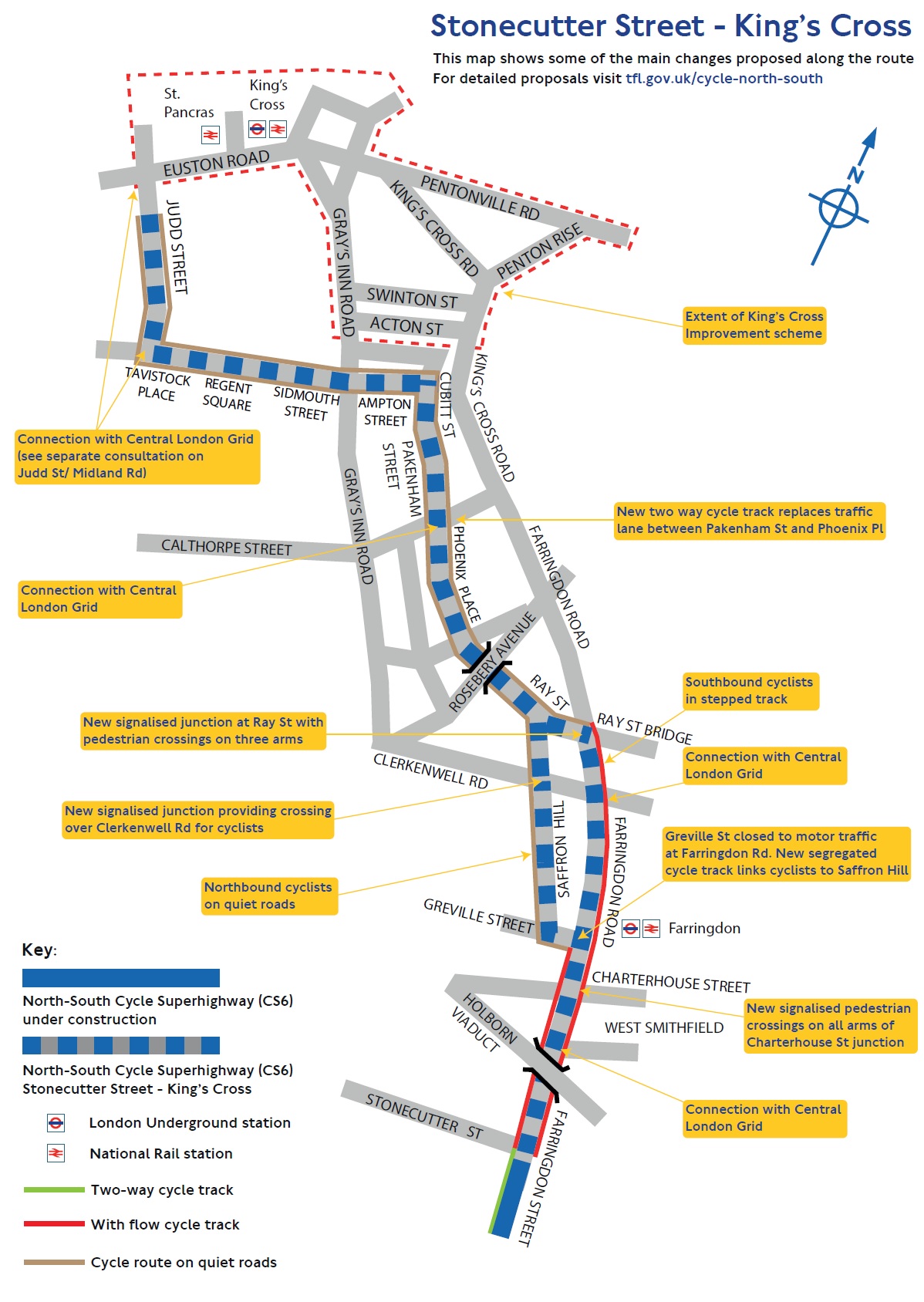 see TfL for details of the consultation. 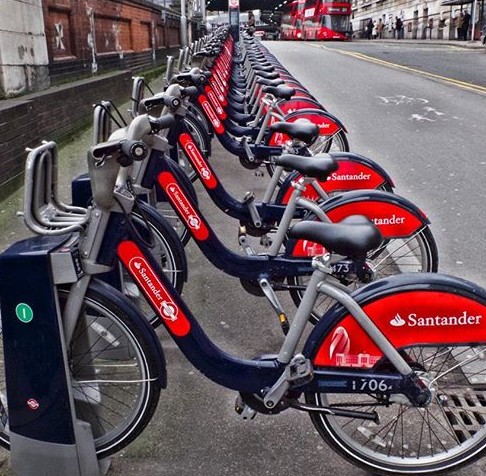 Santander Cycles is London’s self-service, bike-sharing scheme for short journeys. “There’s no need to book – hire a bike, ride it where you like, then return it to any docking station.”

The Low Emission Bus Zones programme, based on work by The Low Carbon Vehicle Partnership was announced in Aug 2016, for a TfL Low Emission Bus Grant of £30 million over three years (2016–2019).

The first 9 of an order of 51 all-electric single decker buses were unveiled in Sept 2016 at Waterloo bus garage. They were to be made in Britain by Chinese company BYD and British manufacturer ADL. The Low Emission Bus Zones programme will be

During 2016, when Transport for London introduced 70% of electric or greener buses along Oxford St NO2 reduced by 30% according to the Evening Standard on 16th Jan 2017.

Hybrid buses are being progressively introduced with expected reductions in “emissions of local pollutants and CO2 by 30% compared to conventional buses.” TfL have “also introduced hydrogen fuel cell single deck buses onto Route RV1, operating between Covent Garden and Tower Hill, in 2011. The only emission from these buses is water.”

In May 2019 The Guardian reported that” Transport for London (TfL) has ordered 20 of the buses, which cost around £500,000 each and only emit water as exhaust.” However these were from Wrights of Northern ireland that ceased trading in Sept 2019.

Taxis –  The Low Carbon Vehicle Partnership reported in Oct 2015 that TfL is providing £65 million to help drivers buy new greener cabs five years before their old ones are out of date (Taxis’ maximum permitted life is 15 years). Also, from “1 January 2018, all taxis licensed for the first time in London must be (ZEC) zero emission capable (less than 50g/km tailpipe CO2 and 30 miles ZE range)…. Additionally, any ZEC taxi can only use petrol for its hybrid engine.”

A poll of taxi drivers announced by the London Taxi Company (LTC) in Sept 2016 showed that 80% of taxi drivers are either “interested” or “very interested” in buying a zero emission capable taxi that LTC will deliver to the market in 2018. This followed the Faster, Smarter, Greener action plan delivered to the Mayor in April 2016 – that supported the move to clean taxis.

Private hire vehicles – “the intention is that all vehicles granted a PHV licence for the first time after 1 January 2023 must be zero emission capable, regardless of age.” (Private Hire Vehicles (PHV)s maximum permitted life is 10 years)

TfL explain car clubs here with a list of some car clubs, which have different payment models and different presences across London. E-Car club only have electric cars, but others vary. For instance:

The single most effective way of reducing London’s air pollution, whilst also contributing to the UKs carbon reduction targets is to steeply and quickly transition from transport fuelled by petrol and diesel to electricity (ideally from clean renewable sources). Before drivers will migrate to EVs in great numbers they need access to charging points
– At or near home
– Around London (and further routes)
– At workplaces for workers and Fleets

Contribution to carbon reduction A Sept 2016 report by the Commons Select Audit Committee concludes that “The uptake of ultra-low emission vehicles like electric cars, is too low to meet the UK’s climate change targets at the lowest cost to the public. Air quality targets that were supposed to be met in 2010 won’t be hit until 2020 at the earliest.”

The committee asked the Department for Transport to step up to the mark, and pointed out they could work with Local Authorities, as they had many ideas to achieve a high uptake. “Local authorities had a range of innovative ideas to drive take-up, such as
supporting electric and low emission fleet procurement
by underwriting risk or
guaranteeing buy-back
helping workplaces invest in charging points
introducing a national grant scheme for electric and low emission taxis.
Ministers should also think about changes to vehicle taxation, including company cars, to make electric vehicles more attractive.“

In July 2019 the GLA published London electric vehicle infrastructure delivery plan “now is the time to really put our foot down and accelerate our city’s transition to zero emission vehicles.”

Charge Now, in partnership with BMWi also has charging points in London, operated by Chargemaster. “Chargenow allows you to charge at over 4000 locations across the UK for just £7.85 a month (inc VAT) and with six months free. Although around 80% of our charging points are free to use, there will be some chargeable posts. These will cost just 9p per kWh excluding VAT”.  See map.

In line with the rest of the UK, London’s electricity comes from a variety of sources, some that are high on carbon emissions and some low. ‘Switch your electricity’  details the UK fuel mix and opportunities for increasing the supply of low emission electricity as promised to “Reduce community-wide CO2e emissions by 60% from 1990 to 2025”. 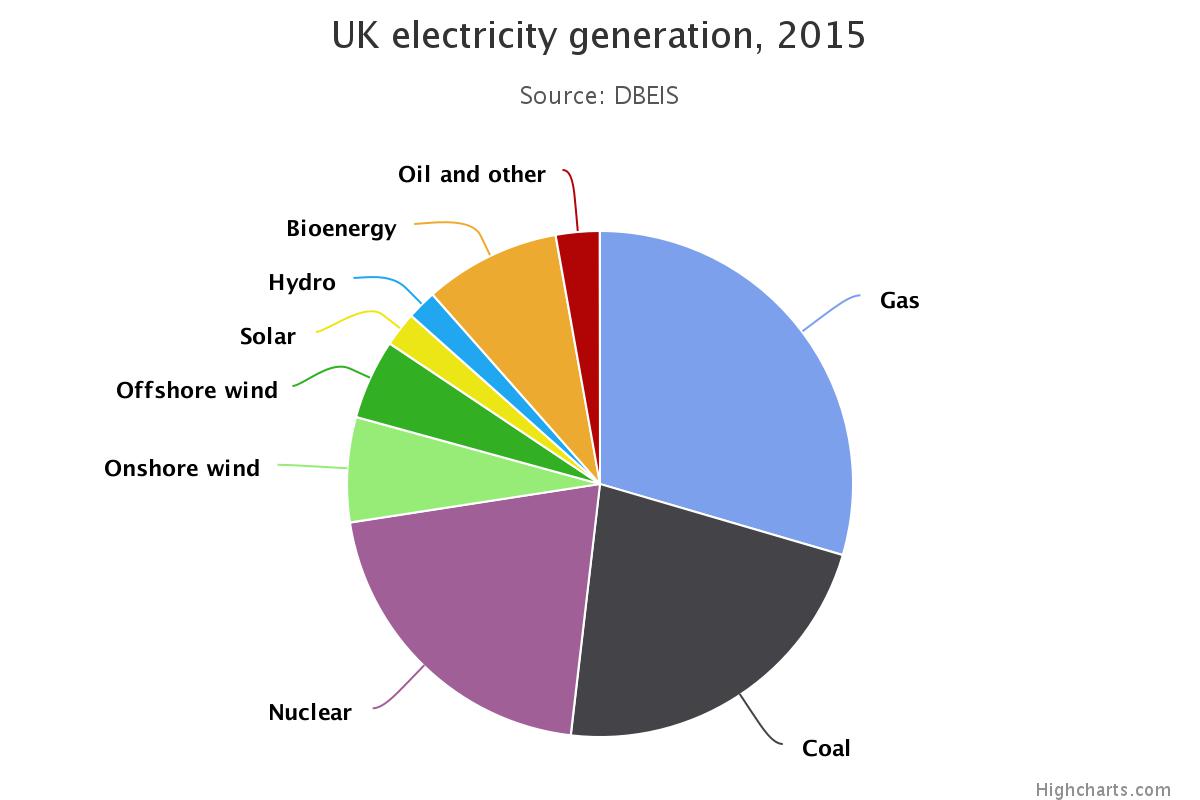 Under Boris Johnson The London Electricity High-level Working Group was set up “to secure a resilient electricity network in London – one that is able to provide connections and capacity for a growing city in a timely and cost-effective way”. Details are published up to June 2013, but none since, and low carbon electricity did not seem to be in scope. During this time London also applied for a ‘Licence Lite’, allowing London to buy excess electricity generated by London boroughs and public bodies and sell it, initially, to TfL.

Greenpeace reported on the shortfalls in Solar generation across London in London Can’t Wait for Solar as schemes for renewable electricity were either instigated by a London Borough (eg Bunhill Row CHP in Islington), or a Community Energy group, such as Repowering (eg Brixton Energy in Lambeth).

As London encourages low carbon, low pollution electric transport the increased electricity demand needs to come from clean sources. And, as the UKs infrastructure is upgraded to match local renewable generation to local demand, there are opportunities to integrate electric car batteries into the ‘smart grid’.

Sadiq Khan in ‘A Greener Cleaner London’ before he was elected, said that he would “Make the most of the city’s roofs, public buildings and land owned by TfL for energy generation by producing a solar energy strategy.” He would establish a company called “Energy for Londoners… support local and community energy enterprises, and buy clean energy generated across the city, using it to power GLA and TfL facilities.”

The company would provide “advice and support to those wanting to set up community energy projects, and acting as a dating service for those wanting to be part of a community energy projects with commercial premises with space for solar panels.” It would be “a not-for-profit company providing a comprehensive range of energy services to help Londoners generate more low-carbon energy and increase their energy efficiency.” Greenpeace was keen to assist in the enterprise. London Can’t Wait for Solar – How the new Mayor of London can start a Solar Revolution in 2016 and reported that “London could generate 20% of its own energy from solar alone.“ The report covered the potential of the TfL estate and the implications of the ‘licence lite’ to purchase electricity generated in London. It also details shortfalls in Solar generation across London so far and proposes several ways to catch up.

Whilst electricity for London is a pan-London, not a piecemeal topic, (see Neighbourhood Level Activities) the Mayor can directly influence TfL power purchasing. And, in Aug 2016, the Mayor announced that, when the licence lite was granted “the GLA will buy clean electricity from a generator panel including five London boroughs, social housing provider Peabody and energy companies Scottish & Southern Energy and Vital Energy…. The Mayor will then aim to supply it, also at a competitive rate, to help power escalators and ventilation systems in tube stations, offices and other facilities.

Energy for Londoners needs to build on these innovations and be set up to work with community energy groups, TfL, companies and local authorities to set in motion a London solar explosion.