What is London Doing?

When Sadiq Khan was elected as Mayor of London in May 2016 he took over high level policies aimed at countering both Climate Change and Air Pollution. eg:

The twin dangers of Global Warming and Air Pollution are both caused by the burning of fossil fuels for transport, heating and electricity. So moving away from petrol/diesel transport, gas fuelled boilers and electricity from coal, oil and gas is the urgent challenge for London.

The most dramatic effect of Climate Change on London is that of flooding, and the Mayor is responsible for planning ‘adaptation’.  As CO2 increasingly causes global warming, London will increasingly suffer from more frequent flooding and also from overheating and water problems.

The damaging effects of Air Pollution, however, are constantly with us and London data clearly shows the effects in terms of premature deaths and illness.

The cause of both is the build-up of Greenhouse gases in the atmosphere, and, although cause and effect of CO2 leading to Global Warming is not as apparent as NO2/particulates leading to ill health, tackling the causes shown below for Air Pollution, will go a long way to solve both problems. 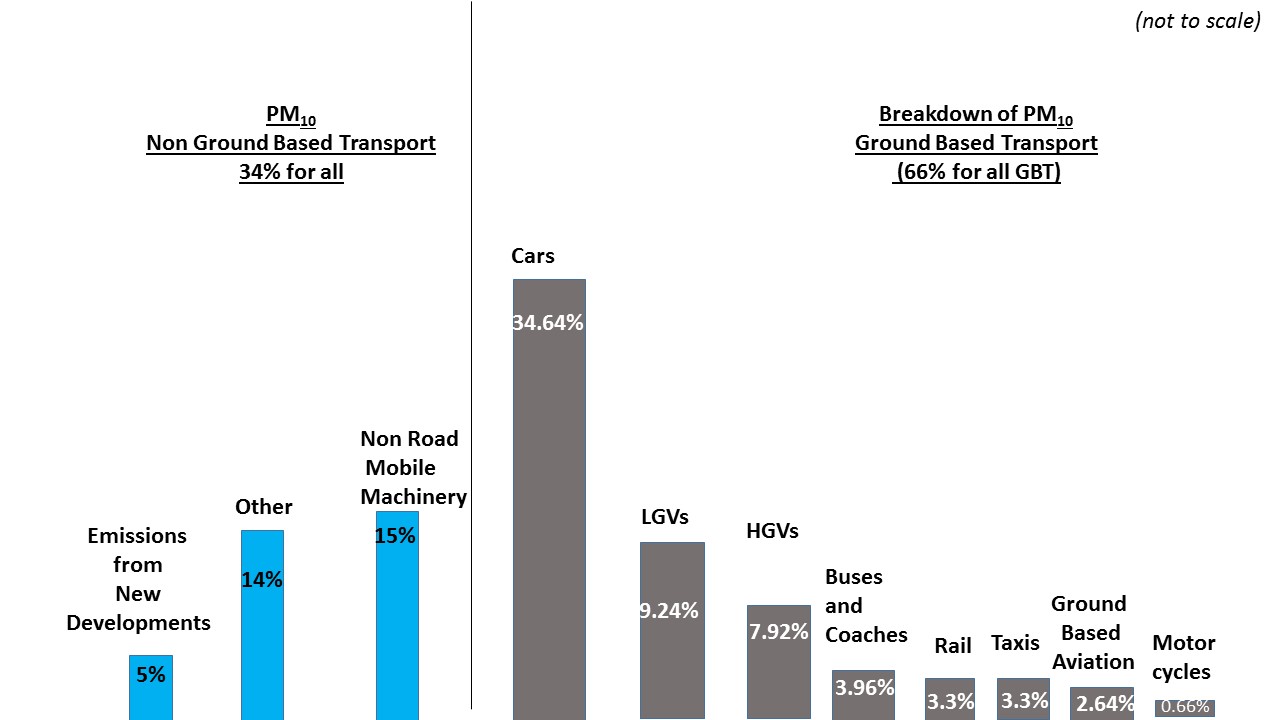 The table clearly shows the urgency of moving from polluting cars to clean cars for Air Quality – and this will help defer Global Warming too.

Powers and Responsibilities of the Mayor and London bodies

For Climate Change obligations, the Mayor has the statutory duty under the Greater London Authority Act 2007 to contribute towards the mitigation of, and adaptation to, climate change, and each London Borough is charged with including CO2 targets in their plans.

Sadiq Khan’s ambitious promises can only be kept by using all of his Mayoral powers (and more) and massively ramping up existing London actions for clean transport, clean buildings and clean energy. These powers include the remit to provide a ‘Vision’ for London and to support investment in public transport, using the £17bn annual budget collected from transport fares, business rates, council tax and government grants.

The Mayor is required to produce a London Plan based on his vision, covering strategies including Environment, Transport, Economic Development and Housing sections that are crucial for reducing carbon and air pollution. In order to deliver these strategies he works closely with the 33 local government authorities (London Boroughs) and controls Transport for London (TfL).

London Councils is a cross-party organisation that represents London’s 32 borough councils and the City of London. The London Council’s Transport and Environment Committee (TEC) co-ordinates issues that are pan London. On 13th Oct the TEC had an Electric Vehicles & Car Clubs Update. For the Go Ultra Low City Scheme it discussed the £3.5m grant from the Department of Transport that will go to the 8 boroughs that applied on 13th Sept for ‘Neighbourhoods of the Future’. A decision was taken “in principle” for the London Councils’ TEC taking on the Delivery Partner Strategy role for EV charging infrastructure and agreement for the TEC to produce a London wide ‘charter’ for both EV charging networks and car clubs. On 20th Jan 2017 the Mayor announced further details of the schemes across nine boroughs. See What are Boroughs, Companies and Voluntary Groups doing? for more information.

Transport for London is responsible  for the Red Routes (busiest, most polluted roads), Buses, Taxis as well as managing other transport facilities such as the Santander Cycles, London Overground and Docklands light railway.

“The Secretary of State expects London boroughs to participate in the Mayor’s London LAQM framework and have regard to any advice or guidance issued by the Mayor of London as to the performance of their functions under LAQM”  (draft London Local Air Quality Management Policy Guidance 2016 (LLAQM.PG (16)) (para 5.01). Summarised from para 2.10, guidance includes:

In effect the London Boroughs have very few powers to improve Air Quality, but many obligations to monitor the pollution.

See ‘What are Boroughs, Companies and Voluntary Groups doing?‘ for some of the activities that London Boroughs are undertaking.

The Mayor also works with Cities across the world, and the UN Conference of Parties to collaborate on Climate Change and Air Pollution issues.

Significant finance is needed to make the highly ambitious transition away from high carbon, high polluting transport, buildings and energy. If London issues ‘Green Bonds’, as referred to above, the funds will be one source of funds for London to undertake major infrastructure projects and to kick-start Borough projects.

Londoners with capital will have a role in investing in London Green Bonds as well as financing community energy. However Londoners also spend considerable disposable income on vehicles, energy and on home improvements. Directing this money into electric vehicles, renewable energy and low energy home improvements would be instrumental in cleaning up London.