When it’s time to look for a car it’s hard to decide which model would do the least damage to the planet and to humans –  as well as suiting your pocket and your lifestyle.

Broadly speaking Petrol cars have the highest CO2 emissions, that cause global warming whereas Diesel cars have the highest pollutants, that cause ill health and death. Electric cars (EVs), charged from a local renewable source, are the cleanest in terms of both CO2 and pollutant emissions. EVs charged from the mains cause an amount of CO2 and pollutants (at power stations) and Hybrids vary, but Next Green Car has a NGC lifecycle index of emissions, making it easy to choose a car that will be as clean as possible.

Energeasy has a simple ‘select the right vehicle for you‘. Next Green Car lists the top 10 low carbon cars, ranging from a luxury Tesla model c70 at £53,935, with a range of 275 miles, down to the runaround Renault Twizy at only £6.895, with a range of only 62 miles. Middle of the road models include the Nissan Leaf OTR  at £24,990 with a range of 155 miles. Electric Streets also lists current electric models at new cars, and motor bikes at bikes with details of purchase and running costs.

There is even a growing sport of Formula E electric racing cars to raise the profile of Electric cars and also an innovative hydrogen car powering electric engines in each wheel being tested – the Riversimple Rasa.

The Low Carbon Vehicle Partnership says that “Road transport is responsible for approaching 20% of the UK’s total emissions of CO2 and most of the critical emissions (particulates and NOx) which can have damaging health impacts in areas of high pollution concentration.” So the meaning of ‘dirty cars’ here is for models that have high levels of CO2 and pollutants, whereas ‘clean cars’ have low levels.

Emissions Analytics, an independent testing body, has introduced the EQUA Air Quality index based on the level of emissions of nitrogen oxides (NOx) in grams per kilometre.  Click here to see which specific models are rated A (Euro 6 limit for diesels, Euro 4 limit for petrols) to H (roughly equal to 12+ times Euro 6 limits). Not all diesels are culprits and not all hybrids are angels. The Department of Transport also commissioned a partial Real Driving Emissions (RDE) test of a cross section of vehicles “from the Vehicle Certification Agency’s site in Nuneaton” that came up with similar results: “On average our measured road test NOxemissions from Euro 5 vehicles were 1135mg/km – over six times higher than the 180 mg/km official legislative NEDC laboratory test limit.“

Although there are days and locations where the levels of pollutants are low, London Air explains that “During still hot weather pollution is able to build up to harmful amounts, leading to what are known as pollution episodes.” and this occurs in cities all round the world and even along busy rural roads. London Air has a mobile App to track current air pollution level. 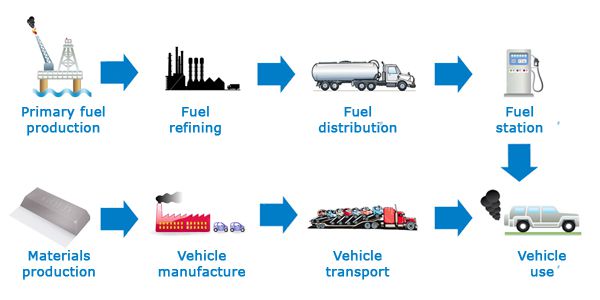 According to Next Green Car “The life cycle carbon emissions for a typical electric car using the average UK mix electricity are around 100 gCO2/km…… the emissions for a small new car…..  is approximately 170 gCO2/km.” So buying an electric car, (especially if using 100% renewable electricity for charging) will reduce your driving emissions and do your bit to address global warming.

Car Pages assumes that electric models use zero carbon electricity and ignores the other lifecycle emissions, arriving at zero CO2 emissions , and this is why it is widely accepted that widespread adoption of electric cars will be needed to combat global warming and bring down deaths in polluted Cities. “MEPs have been told decarbonisation is required and that while ‘biofuels are limited resources, electrification of transport is inevitable’. Electric mobility, which includes public transport and bicycles as well as cars, is ‘a double fundamental innovation with great potential for the transport as well as the electricity sector’ according to the Transport Environment News in Feb 2016.

This does not account, though, for the emissions relating to the source of the electricity. Switch your electricity gives CO2 emissions for different sources of electricity and also links to the fuel mixes of different electricity suppliers. If you are able to charge an electric car at home switching to a 100% renewable plan or installing your own supply will achieve clean motoring.

However, motorists are not familiar with buying electric cars and are concerned that they will cost too much, have short ranges and be difficult to charge.

Plug in Hybrids combine all the advantages of Electric cars with the ability to resort to petrol (or diesel) if a charging point cannot be found. It can be seen at Car Pages Saloons that a PHEW such as the Mercedes emits 65g kw CO2.

It also shows that standard Hybrids, such as a Toyota Prius emits 101g km CO2, similar to many other models. Hybrid generate electricity whilst the vehicle is being propelled by conventional fuel, enabling good MPG and low CO2.. Hybrids do have good miles per gallons (MPG), but not necessarily as good as smaller cars and often not as many as diesel cars.

Though Hybrids as typically much less polluting the Aqua Air Quality Index shows that all the Petrol Hybrids for Euro 5 and 6 were rated A, the Diesel Hybrids were much lower, and a (Porche) plug in hybrid was only a B.

Petrol cars emit more CO2 per mile than diesel. See Next Green Car for Miles per Gallon and Car Page for CO2 emissions.

Typically they have lower levels of pollutants than diesel cars. However note the exceptions discovered by Which in Jan 2016) and the Aqua Air Quality Index also discovered polluting petrol models – some worse than some diesel models.

“Diesel cars tend to be more expensive to buy, but this is off-set by the fact that they usually cost less to run”, according to Next Green Car.

As a good general rule, diesel engines produce fewer CO2 emissions than petrol engines, explained by Next Green Car as “CO2 isn’t the only pollutant that needs to be considered though as there are a number of other gases that come out of an exhaust pipe. NOx (nitrogen oxide) emissions are gaining increasing amounts of coverage as it has one of the most noticeable effects – it is one of the key gases in the build-up of smog. Diesel engines produce a higher amount of NOx than petrol engines (though this can be reversed as the engines get older) and diesel units also produce soot-like particle emissions. Engine manufacturers are tackling these problems, though at a slower rate than first anticipated.” The results at Aqua Air Quality Index show that only 7 of the 130 Euro 6 cars rated A were diesels.

If you’re going to mainly drive on motorways and A roads a diesel car will emit less carbon than a petrol car. It is the realisation that they emit very high levels of pollutants that means that driving diesel close to humans is harmful that makes them a ‘dirty’ choice for urban areas.

Therefore, at a global level, replacing petrol and diesel cars with electric ones will save lives as well as reducing global warming. The big challenge for the motor industry and governments is to make sure that clean cars are affordable and convenient to charge so that they progressively replace dirty cars.